So I was getting terribly upset at myself for my measly progress on my hand work projects, and due to various outdoor actives (putting up a fence and wielding a sledgehammer to pound posts in) my hands were very sore and bruised. So I decided what I needed to do was whip something out by machine. 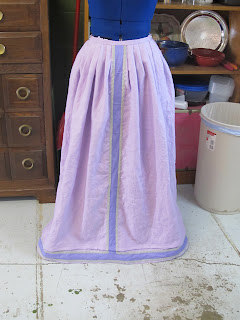 I had just over three yards of beautiful lilac colored linen to make both a petticoat and be the outside of a pair of bodies. It took some careful planning and squeezing, but I got all the pieces cut out without problem. The petticoat is trimmed with some vintage cotton percale binding that needed used up, as well as some very sturdy silver gimp braid I scored on Ebay. It is knife pleated to a two piece waistband and closes with metal buttons on both sides. I thought I had measured very carefully the length of what the skirt needed to be, as I hemmed it and sewed the trim on before attaching the waistband so that the top of the trim in front could be neatly pleated in as well. But the petticoat ended up being about an inch and a half too long. So I also added a small pleat just above the bottom trim to make it the right length, and fortunately achieved more periodness by doing so.  I have yet to make a few lucet cords to attach to the waistband so that it can be tied up through the bodies. 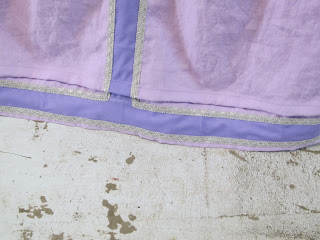 My pair of bodies is a mishmash of two different decades (not very accurate of me but it suites my needs). It is unboned, front closing, and shaped very much like that of Eleanora's burial stays, but has the waist tabs, the spiral lacing  and the means to lace the petticoat up through its waist as in Alessandro Allori's 'Woman at her Toilet' c1575. The outer is the lilac linen and it is lined with two layers of gray cotton. I am currently working the eyelets by hand and should hopefully finish that today.

I also started stringing a necklace, but my limited knowledge on jewelry making has made me give up. I may try another method soon. I also attempted starting to shape the frame for my balzo, but as there isn't a craft store in town that I know of, and no place to find reeds, I was using very young skinny branches from a tree outside. I steamed them and wired a few together and fiddled with it for a while but just couldn't get it and gave up on that too.  So...heres hoping I have an epiphany regarding balzo construction in the near future. Maybe I'll whip out a soccaccia today or tomorrow just so I have something for layer four, and as layer two is almost complete, I can not rush too much with the embroidery and appliqué on the other two layers. I have several very busy months ahead with travel and events, so I really don't know if I'll get much done this year.


Posted by Hannah Fuhriman at 9:04 AM