Wow....its only been how many months since I have posted last? A quick run down of what I have been doing...finished the IRCC 2 (will post more finished pics later) working on renovations with my husband, hunting, tanning hides, made a quilt for a customer, made two adult sized animated movie costumes for customers (Merida's green dress from 'Brave' and Rapunzel's dress from 'Tangled'), started on the first of many wall tapestries for our house and many other various little bits.

My current project has been pushed back to now, after being requested several months ago at Uprising. My dear friend Lady Nicolla requested some user-friendly camp garb. She is involved with both equestrian and heavy fighting and needs some pieces that reflect her late period Italian persona, while remaining feminine, being durable and easy to dress in by herself as she runs from equestrian to fighting to court etc with few minutes to spare.

So these are the ensembles I have planned;

2. Italian gamurra out of indigo linen, front lacing, with either a split skirt or very very full skirt to ride in, over a plain, fitted camicia.

3. Linen and silk, front lacing Venetian gown based off of the portrait; Portrait of a Lady with a Heron by Paolo Caliari c 1550's. over a long linen camicia.


And then, my favorite (not); she is also in need of a new arming doublet, her current one having been well used up over the last few years.

I ordered a few new fabrics, but allot of it is coming out of an overflowing stash that I don't mind using, since her budget is pretty low.

She lives three hours away, and we plan on seeing each other this weekend, so I am going to try to have the innards of all the bodice portions ready to fit her with.

I've started on the riding doublet. Unfortunately I must have been have crazed when I made the toile on her as I made quite a few parts of it really wonky, so I compared the usable parts with a doublet  pattern I had made for her several years back and it was close enough that I felt confidant going ahead and using that.

I started with cutting out the pattern on some extra black linen/cotton and then out of scrap quilt batting (unfortunately it probably has a rather high poly content, but was bulky to store in stash and needed used up) which I then trimmed to reflect a more feminine shape, and then pad stitched the respective pieces of batting to their linen comrades. 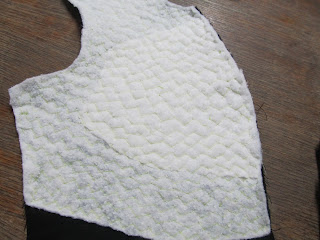 I am lining the doublet with the same sea foam linen/cotton, so I placed the lining layer atop the bare batting layer and then sewed the shoulder seams by hand, flattened and whipstitched the seam allowances down. 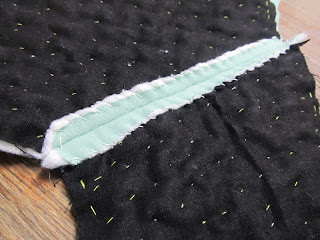 I then lay the outer layer (with shoulder seams also already sewn and pressed) atop the layer of black linen and machine basted along the long sides, ending up with two halves of a doublet. I then pinned the back seam and side seams together along what would be the seam allowance so I can fit her on Saturday. 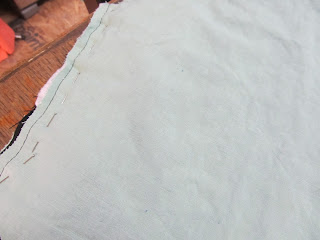 Planing on cording the gamurra bodice, so need to run to town and see if Ace has what I need. The cord I have is buried behind flooring and boxed countertops and I do not have the energy to dig it out.

The fabric for the Venetian gown is pre-washing as we speak.
Posted by Hannah Fuhriman at 11:25 AM