And then I made a few hats for the men in the wedding entourage. Zach already had a hat, but I had made the top too small, so I tore that one apart and made a new top, then added a cord of blue/black and silver lucet cord. It is made from black velveteen. the brim is interlined with several layers of linen and the top is lined with scrap silk.

I made another cap in the exact same style for one of Zach's groomsmen, this one out of a really dark blue wool. I did the visible stitching in silver thread to make it better match the doublet that goes with, and made a silver tassle to hang off the band...not sure I like that final touch at all yet, I'll wait for some masculine input or from someone who knows about hat decorating in the fifteen hundreds.

The third cap I made was my first try at one of the three-cornered hats seen worn by older gentlemen of the period, with a simple band instead of a brim. I'm hoping this one will fit with the pastor and his garb, but again, not sure I like how it turned out. 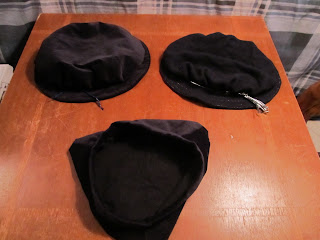 The picture is kind of lame unfortunately and doesn't really show what they look like on a person's head, and I have a lack of models this week. And once again I am bemoaning the fact that time restraints don't allow for much research. I cringe to think at some of the shortcuts I'm taking for wedding garb, but alas, what else is to be done? I just need to remind myself of the true purpose for all this and stop worrying.
Posted by Hannah Fuhriman at 9:51 AM